Someone Should Pay for Your Pain by Franz Nicolay (of the Hold Steady and other projects), is out from Gibson House Press. The novel follows singer-songwriter Rudy Pauver, his conflicted relationship with a successful former protégé, and a young niece who wants to travel with him and whose appearance forces a reckoning with himself and his past. 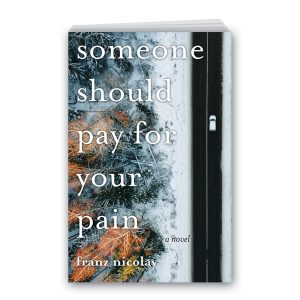 In the doldrums of a career as a cult figure, singer-songwriter Rudy has been overshadowed by Ryan Orland, to the point where Rudy is now identified as an imitator of the younger man. Ryan is generous and supportive of Rudy, but Rudy finds it hard to be grateful. Forced to confront the limitations of his own talent and ambition, his resentment triggers a confrontation that ends in their estrangement. When Rudy’s niece, a teenage runaway who admires the freedom of his lifestyle, turns up asking to join him on the road, he has to come to terms with the nature of his obligation to family and accountability for his past.

Someone Should Pay for Your Pain is an exploration of the nature of creativity and popular success; artistic and ethical influence; the pathos of the middle-aged artist; changing standards of sexual morality; and guilt and penance in a post-religious society.

Buzzfeed put it on a list of “great books to read this spring” and called it “a knockout fiction debut.” Rolling Stone’s Rob Sheffield tweeted, “Remember buying a novel at an actual bookstore & taking it home & starting it, then you can’t stop & you’re up till 3 a.m. plowing through it? Thanks to the great Franz Nicolay for writing That Novel. A punk rock tale like no other.” Razorcake said “Nicolay’s pitch-perfect observations make his story intriguing and all too true, zooming by like trees on the side of the highway.” Chronogram called it “punchy and wise…brutally funny and heartfelt.”

A book group guide is available on the publisher’s website.

About the author: Franz Nicolay is a musician and writer, a member of the Hold Steady and other projects. His first book, The Humorless Ladies of Border Control: Touring the Punk Underground from Belgrade to Ulaanbaatar, was named a “Season’s Best Travel Book” by The New York Times. He lived for several years in Northern California’s East Bay but recently returned to New York’s Hudson Valley.

Gibson House Press connects literary fiction with curious and discerning readers by fostering and promoting individual writers and their work. A traditional publisher with trade distribution through PGW, Gibson House Press publishes excellent books from both working musicians and musicians at heart. Recent and forthcoming authors include Suzzy Roche and Junior Burke, in addition to Franz Nicolay. The press is based in Chicago.

Visit our online store to learn about and shop for our latest books and fun merchandise. Follow us for updates on new titles.
Shop Books