Junior Burke answers five questions about writing his “witty and crisp” academic satire, Buddha Was a Cowboy (Gibson House Press, September 13, 2022) with writer Peter Robertson. In the novel, the aftermath of a car crash leads Hollywood scriptwriter and one-book-wonder Aaron Motherway to what looks like a dream job at a small counterculture college in Wyoming. But Parami University, its cast of characters, their entanglements and estrangements, will provide more than enough fodder for whatever Motherway wants to write next, for the screen or the page.

PR: What inspired you to write this novel?
JB: I wanted to further address the gulf that has taken up residence in the American culture. My previous novel, The Cold Last Swim, concerned itself with the seeds of that estrangement and Buddha Was a Cowboy explores it from a more current perspective.

PR: Are there correlations in the culture right now that make the story timelier than ever?
JB: While Buddha Was a Cowboy seems contemporary, it’s actually a period piece, largely taking place between 2014 and 2015. Many rustlings were occurring in those days before the changes became even more drastic and profuse.

PR: Your background includes college-level teaching and writing music in Hollywood and Chicago. Is Buddha Was a Cowboy informed by some of your real-life experiences?
JB: Not experiences so much as arrived-at sensibilities. I came to teaching after being solely an artist for many years. My teaching background is quite varied. It started at Tennessee State in Nashville, one of the most prominent historically Black universities. Later, I was on the faculty at Naropa University, a small private institution in Boulder, Colorado. And I was a Lecturer at the University of Colorado, state-funded and massive, also in Boulder.

PR: What made you choose to set your story in academia? Were you influenced by some of the classic academic satires? How do you see that genre as changed and still relevant?
JB: I’ve always been enthusiastic about campus novels, especially the English ones, such the hilarious Decline and Fall by Evelyn Waugh, and was aiming at some contemporary version of that. Gore Vidal once said that a writer in America can either make a living in academia or in show business. Since there are so many writers who teach to support their writing habit, you’re still going get plenty of campus novels. Hollywood’s different in that there are many writers, but most don’t concern themselves with literature. Novels about Hollywood that are truly literary are more from a bygone era.

PR: Gibson House Press publishes “excellent novels by musicians and musicians at heart.” Tell us about your music background. How is it reflected in this novel?
JB: I effectively stopped performing around the time I was thirty. I never stopped writing songs and recording, but had decided to write prose fiction, which is the furthest thing possible from traveling around and getting up onstage. The Cold Last Swim was much more concerned with music, particularly the early days of the rock ’n’ roll studio production. Buddha Was a Cowboy references music without a great deal of focus on it. The title of the book, however, comes from a song that one of the faculty members composes. A really bad song, I might add.

PR: Bonus Q6–Your previous book, The Cold Last Swim (GHP 2020), was a novel of alternate history beginning with a 1950s faceoff between James Dean and Ronald Reagan and getting weirder from there. The two books are similar in frenetic pacing, large casts of characters, and a background of social and cultural upheavals leavened with satirical humor. How is the direction of your new novel similar/different?
JB: Since both have an ensemble of characters, that largely locks you in to writing from third person objective, using various locations. So in that sense, those works are more filmic. I’ve yet to write a novel or even a short story in first person

Junior Burke‘s The Cold Last Swim (Gibson House Press, 2020) was one of five finalists for a Sidewise Award, the annual prize for novels of Alternate History. His short fiction was included in the anthologies Litscapes: Collected US Writings 2015 and Collectibles, published in 2021. Burke’s novel Buddha Was a Cowboy is forthcoming in September 2022. He lives Out West.

Gibson House Press is an independent press with a focus on literary fiction by writer-musicians.

Preorder Buddha Was a Cowboy at your favorite bookstore or request it at your local library. 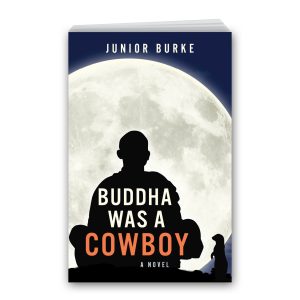 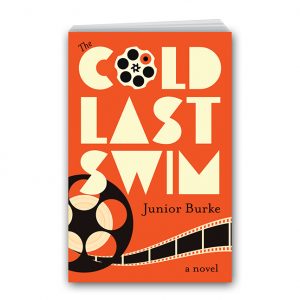