Update 9/21: The Cold Last Swim named a finalist for the Sidewise Awards for Alternate History

“Jimmy Dean, clip-on shades and motorcycle boots, walked late onto the set of the General Electric Theater. Cast and crew were there, as was Ronald Reagan, coproducer and actor-host. Jimmy was in character, although not precisely the one he’d signed on to play. He was deep into James Dean, New York stage actor, big screen Technicolor star . . . ” 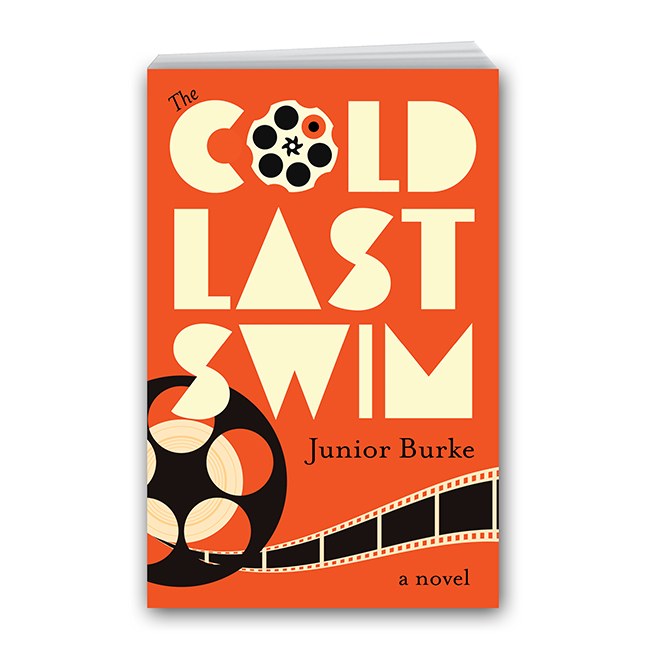 The Cold Last Swim
By Junior Burke
View in Store

“1954 – the young James Dean shoots Ronald Reagan on live TV. Dumped by the studios, Dean doesn’t make Giant and isn’t killed in a car crash. Instead, he jumps bail, disappears, disastrously impacts lives, and becomes . . . well, that would be telling. The Cold Last Swim is entertaining and surprising all the way to the end.”

— Alex Cox, director-writer of Repo Man and Sid & Nancy, and author of The President and the Provocateur: The Parallel Lives of JFK and Lee Harvey Oswald

“In this shrewd reimagining of James Dean’s life and death, Burke concocts a mesmerizing ‘sliding doors’ narrative that asks the reader to consider the ‘what if?’ of Dean surviving that infamous car crash. With smartly noirish rhythms and a cast of colorful, quirky characters, we find ourselves tossed between incredulity and eagerness, driven to discover where the ‘alternate history’ of this cultural icon just may take us.”

— Lorraine Devon Wilke, author of The Alchemy of Noise and After the Sucker Punch

“Quentin Tarantino isn’t the only writer around today who is offering an alternate history to famous cultural events. In his compelling and richly entertaining novel The Cold Last Swim, Junior Burke presents his own version of what happened to James Dean, that ultimate icon of cool, in this luminous love letter to Hollywood and the golden age of filmmaking. Full of surprises, it is a joy from beginning to end.”

“Cast in the style of noir, albeit sunny California noir . . . Burke’s narrative is a whirlwind escape into the speculative Land of What-If,” and “the timing . . . might well be perfect. We can be entertained in Burke’s alternate land of the stars and the star-struck just at a time when the real world brakes to a dead stop.”

“In this gorgeous and powerful new novel, James Dean ignites pieces of paper with his cigarette lighter, one after another. A revenant yet desiccating presence, he appears then disappears. A character pronounces:’Art has to be inevitable.’ This, for me, was how Junior Burke’s book worked its magic. The narrative was irreversible, a conduit between the world as it was and the world as it could be. Streaming in the background: a pastel-toned Pasadena or a neon Sunset Boulevard, a succession of Californian atmospheres that make The Cold Last Swim a particular and immersive pleasure to read.”

—Bhanu Kapil, Author of The Vertical Interrogation of Strangers and How To Wash A Heart

“Set in an alternate-timeline version of golden-age Hollywood, it kicks off with James Dean shooting Ronald Reagan during a live TV broadcast in 1954 and gets stranger from there.”

During a live television performance of the General Electric Theater in 1954, a young James Dean brandishes a pistol at fellow actor (and weekly show-host) Ronald Reagan. Dean goes off script and kicks off an alternate history, a “sliding doors” narrative that mixes real and imagined events.

The Cold Last Swim features two cultural icons: one who would be dead within a year, immortalized as a symbol of cool rebellion; the other, in a little over a quarter century, would become leader of the free world, the standard bearer of traditional and even fundamentalist values. Each reflects fifties America: Reagan is firmly established among the open freeways and unblemished skies of sunny Los Angeles; Jimmy, emerging from the black-and-white shadows of a rainy New York street.

Told largely from Jimmy’s viewpoint, but incorporating a diverse cast of period characters, The Cold Last Swim is classical Greek drama: Reagan’s Apollo, god of light, warmth, and temperance; Jimmy’s Bacchus, license, alienation, and impulse. In this era between the mid-fifties and mid-sixties, we recognize the seeds are being sown for the cultural gulf that divides America today.

Besides The Cold Last Swim, Junior Burke is the author of the forthcoming novel Buddha Was a Cowboy (Gibson House Press, 2022). He is also a songwriter and recording artist whose 2007 album While You Were Gone was named by New York’s Bowery Poetry Club as one of the best releases of that year. Other albums include Spot of Time (2017) and the EP America’s a Lonely Town (2019). He lives in rural Colorado. Visit juniorburke.com