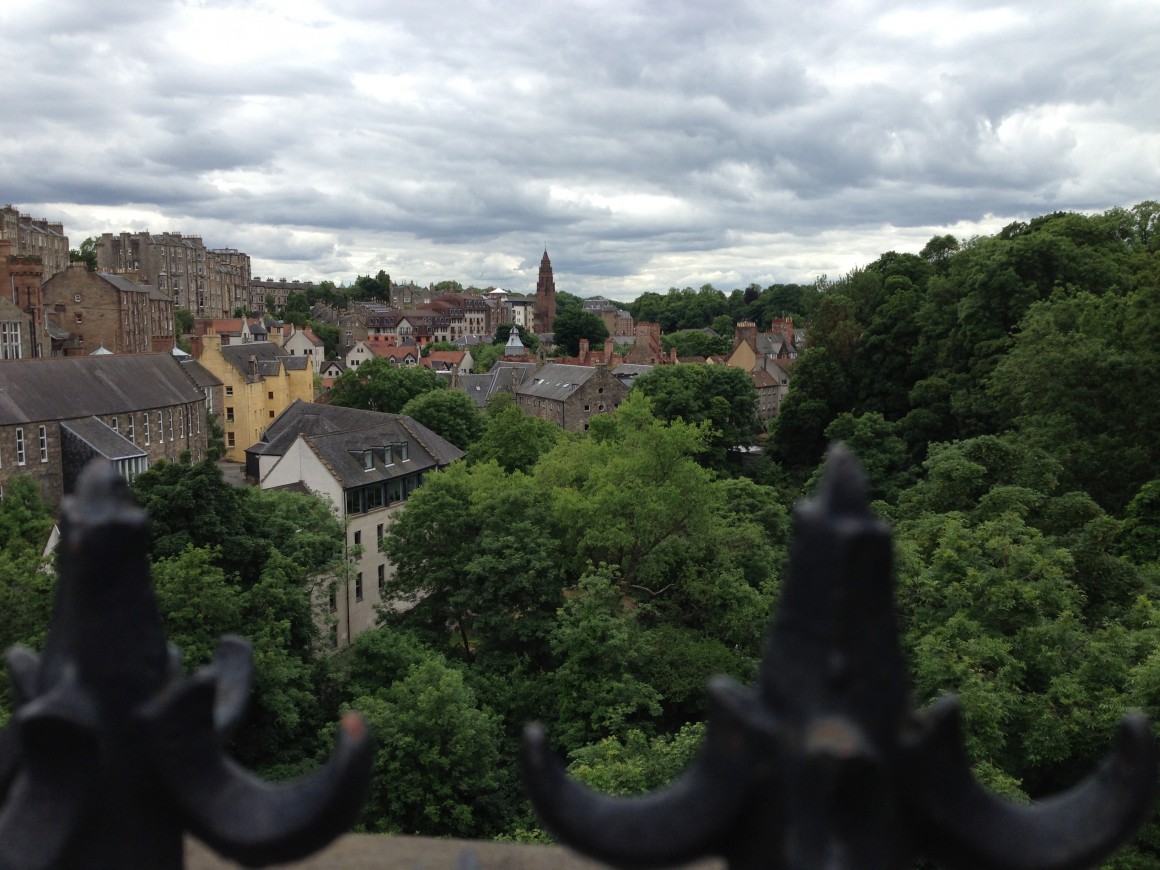 I once came across an Edinburgh walk proposed by Ian Rankin, the author of the Rebus mysteries and a longtime resident of the Scottish city where I grew up. Make no mistake, Rankin’s route is a great one, but it does require one taxi ride, and more than one day to complete. Mine manages to be both shorter and cheaper. 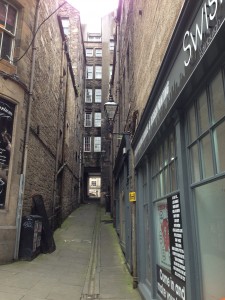 I start at the top of the Mound, beside the main branch of the library, on George IV Bridge. In my case I get there on the 41 bus from Davidson’s Mains, the same bus Kate Atkinson used to send her detective Jackson Brodie to a floating body down at the beach at Cramond. Speaking of Brodie and Atkinson, as you cross the road and walk down West Bow Street towards the Grassmarket a glance upwards and to the right reveals the site where Jackson’s office was located in the PBS series.

I time my walk to start close to twelve, which is when the Bow Bar opens at lunchtime. The beer list constantly changes, but last time I was there I had a decent Welsh Pale Ale. I find it pays to be adventurous and try something new.

The walk across the Grassmarket is mostly cobbled. This was one of the city’s oldest and grimmest sections, now well yuppified and filled with bars and restaurants. At the other end of the Grassmarket I climb a steep set of stairs and get onto the Royal Mile close to the castle esplanade.

The view of the city in all directions from here is impressive and stretches to the Pentland Hills to the south and across the Forth to Fife as you look north. Skip the castle itself. Architecturally, too many cooks have had too many hands in the structural evolution of the place and the overall effect is at best utilitarian and at worst schizophrenic.

A hike down the Royal Mile is equally confounding. Tourist tartan stores, crap bars, neat closes. I get as far as Cockburn (pronounced co-burn) Street. It used to be filled with new and second hand record stores, quasi-hippy stores where you bought joss sticks and jeans. They’re mostly gone but the street still winds its way agreeably down towards Princess Street. Halfway down, Anne Hathaway got a kiss at the bottom of the stairs in the abysmal “One Day,” and the same moss-green steps appeared in the animated film “The Illusionist.”

There’s a Starbucks at the corner of Cockburn Street and the Royal Mile and the upstairs is perfect for a spot of people watching if you need a break from walking.

Cockburn Street becomes Waverly Bridge, passes the Waverly Station on the right and the Walter Scott Monument on the left. I turn right on Princes Street for a block and walk on the north side of the street. I make a left onto West Register Street and stop at the Guildford Arms on the right for lunch and another pint. The bar is old wood and circular and high ceilinged and the restaurant section is both upstairs and to the back. The draught beer selection is excellent (my pint was from the Orkney Brewery) and the lady behind the bar was happy to offer samples before I made my choice. The pâté starter was delicious.

After lunch I turn right outside the bar and follow West Register Street right and left until you hit South St. Andrew Street. Turn right and turn left onto St. Andrews Square. Edinburgh’s New Town section has two large squares at either end of George Street. Both have tall statues in the middle.

Walk half way around the square and turn left onto George Street heading east. This was to be Edinburgh’s main street but Princess Street became a bigger shopping draw. George Street is however more elegantly Georgian and has less shoppers on the pavements.

When George Street crosses Frederick Street I turn right and head downhill towards Stockbridge, past gardens and more Georgian architecture. Frederick Street becomes Howe Street and I turn left at South East Circus Place which becomes North West Circus Place. Pass another Starbucks on the right (not so great a view as the Royal Mile one) and a Cafe Nero also on the right (a very good coffee shop, and worth a stop if you skipped the earlier coffee break, or need a restroom after all the fluids taken in at the Bow Bar and the Guildford) at the traffic lights at the bridge at the corner. Don’t cross the bridge. Turn left instead and follow the road along the water. The road becomes a footpath and the water to the right of the path is the Water of Leith.

The path is dark and muddy and usually pretty quiet. There are gardens on the left that belong to the high Georgian flats towering behind. There is a small bridge over the water and later a much larger one. This is the Dean Bridge. Beyond the bridge is Dean Village but we’re leaving the path here and heading south, away from the water and turning left onto Bells Brae and back up a steep cobbled road to the Dean Bridge.

Stay on the left and cross the bridge. Look down if you can. The view is great but a long way down.

At the other side of the bridge I catch the 41 bus back to Davidson’s Mains, or I stay on the bus all the way to the foreshore at Cramond. But that’s your choice. The short walking tour has officially ended. Thank you for your time.

Peter Robertson is an Edinburgh native and author of the mystery novels Permafrost and Mission, which are set in Michigan and Colorado, respectively, and feature a main character who hails from Scotland. 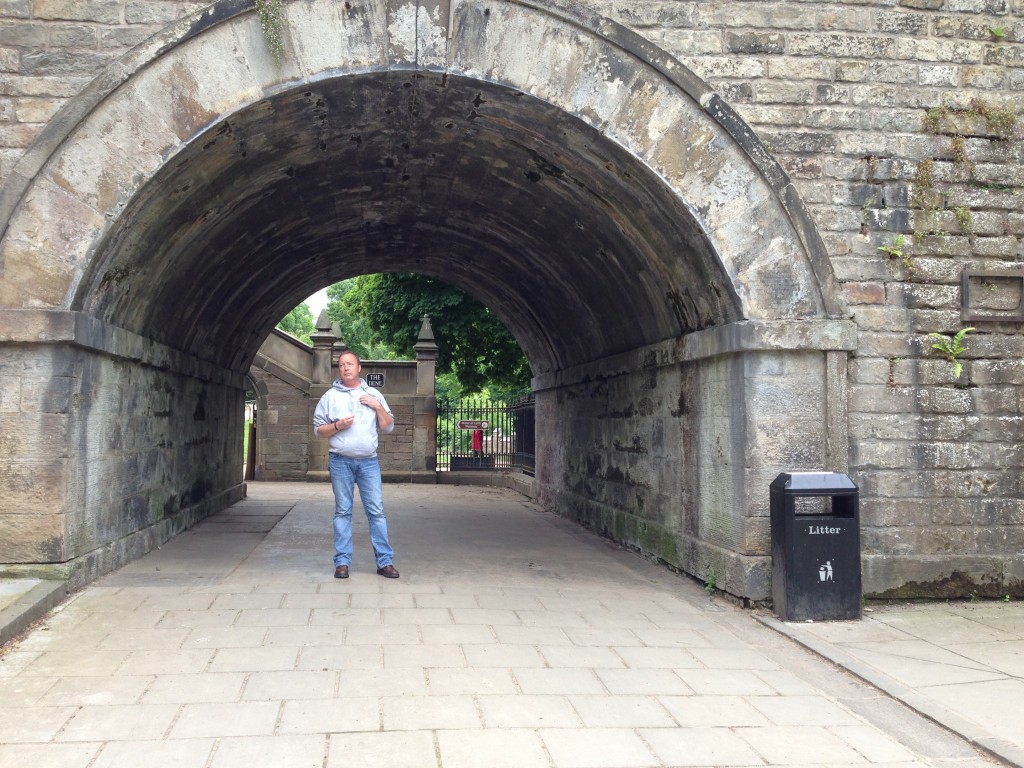